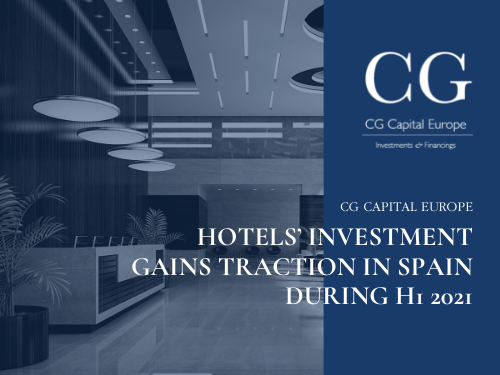 Hotels´ investment in Spain amounted €1,900 million during H1 2021, +c.14.5% vs. FY 2020. During
the first half of the year there have been over 52 transactions closed, being most relevant ones:
purchase of the Hotel Edition Madrid for c.€205 million by Archer Capital, acquisition by Bankinter
private banking of a portfolio of eight hotels owned by Meliá for €203 million and acquisition for €125
million of the NH Collection Calderón in Barcelona by LaSalle Investment.

Higher vaccination rates and subsequent improvement of tourism has led to a growth in investors’
appetite for this typology of assets, as in a normalized situation these assets show secured returns, being
liquid assets and permitting divestments with minimum discounts due to the great appeal of the
Spanish tourism market. This is being reflected in the large deals that are expected to take place during
the following months such as the purchase by Riu Hotels & Resorts of a minority stake in TUI joint
venture or sale of Selenta Hotel Group’s portfolio.

The appeal of Spanish hospitality market is underpinned by the great performance of Barcelona and
Madrid which are positioned in the first and seventh positions amongst the top urban destinations in
Europe respectively; sharing stage with other cities, like London, Paris or Amsterdam. In addition, it
should be noted the importance that Málaga is gaining within Spanish Real Estate market, as it closed
2020 as third Spanish city by investments with its hotel market showing a remarkable recovery
expectancy, with occupation levels and ADR’s predicted to return to pre-covid levels during the
coming two-three years.